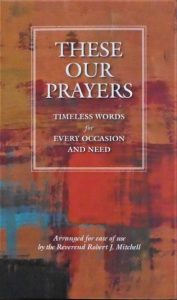 The Book of Common Prayer, as most readers of this article will know, is a great treasure-house of prayers that are appropriate to a wide variety of occasions. The long section of “Prayers and Thanksgivings”, contained on pages 37-61 in the BCP, is no doubt familiar to many. But perhaps some of us may not always be aware of the other riches that it contains. Some of the best gems can be found in rather unexpected places. For example, one of the prayers that I have often returned to in my own private devotions is the “Prayer for Steadfastness”, found on page 635 – under the “Forms of Prayer to be Used at Sea”, of all places. (It is said to have been composed by Sir Francis Drake, the first English captain to complete a circumnavigation of the globe in the year 1580.)

Now, however, for those of us who sometimes search for a prayer for a particular occasion or need but don’t know where to find it, a new resource is available. It has been compiled by the Revd. Robert Mitchell, the rector of St. Olave’s Church, Swansea (in the west end of Toronto) – one of the few remaining churches in the Diocese of Toronto where all of the worship is still conducted entirely according to the Book of Common Prayer. This attractively produced book, called “These Our Prayers”, contains a comprehensive collection of hundreds of prayers, thematically arranged, for a variety of occasions. As the summary on the back cover puts it, “Whether it’s a time of anxiety, sickness or celebration, you will find a tried and tested prayer for any need in this collection.”

The prayers are almost all drawn from our 1962 Canadian BCP. Many come from services that are relatively little known, such as the Penitential Service (p. 613), the Service for Young People (p. 622), and the Order for Compline (p. 722). The compendium includes the Sunday collects, since although they were originally designed to complement the BCP lections for each Sunday, they are often very suitable for other occasions or needs. Some prayers are taken from the Canadian Book of Occasional Offices (which was published in 1964 and is widely accepted as a supplement to the Prayer Book). A few come from the 1918 Canadian BCP; a few more are original compositions of Fr. Mitchell’s; and the collection also includes the Advent “O Antiphons” from the 1933 English Hymnal.

This project was funded in part by the PBSC, and we are delighted to see how well it has turned out. The book can be ordered directly from St. Olave’s for pick-up at the church, through the parish website. The cost is $25, and proceeds of all sales go to St. Olave’s. Or, it can be ordered for delivery through the online Lulu book store, at a cost of $22.99 plus tax, shipping and handling. It would make a marvellous Christmas gift!