Should They be Wiped Out of the Book of the Living?
Restoring the Omitted Portions of the Imprecatory Psalms

The Revd. Chris Dow explains the rationale for offering this new option beginning in 2021 in the BCP mobile app. Read the full article here.

The New Prayer
“For Reconciliation with the Jews”

In 2018-2019, a movement was underway to delete the prayer found on page 41 of the BCP, “For the Conversion of the Jews”. Quite apart from arguments as to whether the prayer is actually anti-Semitic or not, the Society was concerned that an attempt was being made to modify the Prayer Book without going through the required canonical steps of securing a two-thirds majority in favour of the motion in each of the three houses of Bishops, Clergy and Laity at two successive General Synods. Moreover, the proposal was to simply delete the prayer and put nothing in its place, without even considering how the prayer might be modified or possibly replaced. This cavalier approach to deleting material in the Prayer Book seemed to the Society to be setting an undesirable and dangerous precedent. Accordingly, representatives of the Society approached the movers of the motion and successfully proposed a replacement prayer, which was almost unanimously approved at the following General Synod, and moreover received high praise from the Jewish groups that were consulted. The whole process is documented in the Easter 2018, Michaelmas 2018, Lent 2019 and Thanksgiving 2019 issues of the PBSC Newsletter.

This was a three-part series of essays, written in 2015 by the Revd. Dr. Gordon Maitland, PBSC National Chairman, to mark the thirtieth anniversary of the introduction of the Book of Alternative Services. The essays appeared in three successive issues of the PBSC Newsletter.

PBSC Response to the Commission
on the Marriage Canon

In 2014, in response to a general invitation to comment on the proposed change to the Marriage Canon put forward at General Synod in 2013 (to permit the marriage of same-sex couples), the Society submitted a statement upholding the traditional Christian doctrine of Holy Matrimony. The text of the statement ran as follows: “The Prayer Book Society of Canada (PBSC) thanks the National Church for inviting submissions on the proposed changing of the marriage canon to allow same-sex marriage. The PBSC holds the following view, which we believe to be the constitutional and doctrinal position of the Anglican Church of Canada, following the classical understanding and theology of Christian marriage as articulated in the Book of Common Prayer and consistent with the Solemn Declaration of 1893; namely, that the catholic and apostolic definition of marriage is the lifelong and exclusive union of one man and one woman.” Further details can be found in the Michaelmas 2014 issue of the PBSC Newsletter. 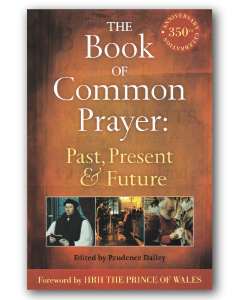 The Book of Common Prayer:
Past, Present & Future

This book contains a collection of fourteen essays that were commissioned and published by the English Prayer Book Society on the occasion of the 350th anniversary of the 1662 Book of Common Prayer.  The essays seek not only to explore and commemorate the Book of Common Prayer’s influence in the past but also to commend it for present use, and as an indispensable part of the Church’s future – both as a working liturgy and as the definitive source of Anglican doctrine. The foreword is by the Prince of Wales, and the authors include such luminaries as P.D. James and Terry Waite.  Five of the fourteen essays are by Canadian authors, reflecting the warm ties between the English and Canadian Societies.

The book can be ordered from online sources such as amazon.ca.

In 2011 Desmond Scotchmer, a past National Chairman of the PBSC, wrote this moving essay giving an overview of the concerns that led to the founding of the Society in 1986, the challenges that it faced in its early years, and its key accomplishments.

“Common Prayer” and “Common Worship”
are Not the Same

This was a joint statement issued in 1998 by the English, American, Canadian and Australian Prayer Book Societies, upholding the general concept of common prayer.

Submission to the Book of Alternative Services
Evaluation Commission

This lengthy series of essays was prepared in 1991 following the establishment by General Synod of a commission to evaluate the Book of Alternative Services. It specifically addressed questions posed by the sub-group on theological issues, and dealt in depth with topics such as the relationship between Scripture and liturgy, shifts in the theological underpinning of worship forms, and the influence of contemporary theological themes.