(By the Very Revd. Chris Dow, a member of the PBSC National Council, who was chosen to be Dean of the Arctic and rector of St. Jude’s Cathedral in Iqaluit last November.) 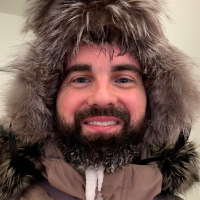 After several hiccups and delays, including a cancelled flight and a COVID scare, my family and I finally arrived in Iqaluit on December 19th, only for Nunavut to enter into a strict Omicron lockdown on the 24th. Much to everyone’s disappointment, Christmas services had to be cancelled at the last minute. For the next two months St. Jude’s was closed for in-person worship (although our bilingual livestream services were well-received). On February 28th we were finally allowed to re-open, although only at 25% capacity. So in some ways I feel as though my time in Iqaluit hasn’t really started yet, as the COVID restrictions have also prevented me from visiting with parishioners as much as I would like.

But I am taking online Inuktitut classes, preparing to teach a course on the Psalms at the Arthur Turner Training School, and working on the next major development phase of the Common Prayer Canada app. We are in the early stages of adding Indigenous languages, beginning with Eastern Arctic Inuktitut. There are about 40,000 native speakers of this language, located mainly in Nunavut and northern Quebec. There is also a significant population in Ottawa. The writing system used in Inuktitut is based on the syllabic writing originally developed by Methodist missionary James Evans for Cree speakers, which was later adapted and introduced to the Inuit by Anglican missionary Edmund Peck. Here is a sample of it:

The Canadian Bible Society (CBS) has granted us permission to use the Eastern Arctic Inuktitut Bible (EAIB), published in 2012. The EAIB text is already fully digitized, so it can be integrated into the app quite easily. It will be the fourth Bible version available within the app, along with the KJV, ESV and NRSV, and it will be the first one in a language other than English. When users select the EAIB option, the appointed Psalms and Bible lessons will appear in Inuktitut syllabics. We expect the EAIB to be added to the app this spring. We are delighted to partner with the CBS and are very grateful for their generosity in allowing us to use their digitized texts. (For more information on the EAIB, see the text below, provided by the CBS.)

Unfortunately, the Eastern Arctic Prayer Book is not yet digitized, so we will be partnering with Inuit Anglicans in the Diocese of the Arctic who will manually type the text of the liturgies in Canadian Aboriginal Syllabics unicode. This is slow, careful, detail-oriented work that could take up to a year to complete. We would like to acknowledge the generous contribution of the Ottawa Branch of the Prayer Book Society which is helping to fund this project. If you would also like to make a donation, you can do so through the Canada Helps link on the ”Donate” page of our website. Your gift will be used to pay our developer and provide honoraria for our typists.

About the Eastern Arctic Inuktitut Bible

The Canadian Bible Society partnered closely with the Anglican Church diocese of the Arctic on the production of this scripture translation. The translation project was established by Dr. Eugene Nida, Translation Director for the American Bible Society in 1978 at the invitation of the Anglican Church. It is the first complete Bible translated in Canada where all of the translation has been done by speakers of the language (all Anglican priests, two of whom were consecrated as Bishops during the course of their work on the translation). The New Testament was first published in print in 1992, with at least 5 subsequent reprints. The complete Bible was published in 2012 and dedicated in the new Cathedral in Iqaluit on June 3, 2012. A revision of the New Testament was published in 2021. If you are interested in obtaining a printed copy of this Bible, please contact the Canadian Bible Society.