This page contains settings for the sung parts of the Prayer Book services of Morning Prayer, Evening Prayer and Holy Communion, recorded for the Anglican Church of Canada in the early 1960s, as well as some excerpts from a later congregational recording.

Recordings of the musical settings for Prayer Book services 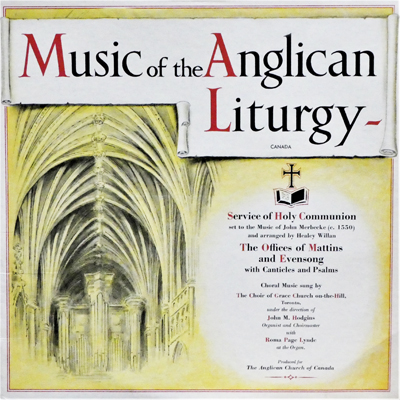 The music presented here has been digitized from a vinyl LP record entitled “Music of the Anglican Liturgy – Canada”, which was produced in late 1963 or early 1964. As is usual with recordings of this age, some surface clicks and crackling are present. Here is the text from the jacket of the record.

This recording was prepared at the request of the Anglican Book Centre as a guide to the music of the 1962 Prayer Book, and is sung by the choir of Grace Church on-the-Hill, Toronto (by permission of Canon J.H. Craig, Rector) under the direction of John M. Hodgins with Roma Page Lynde at the organ. Precentors: The Rev. Llewellyn Graham and Mr. Giles Bryant. Recording director: Keith C. MacMillan.

For this recording Mr. Hodgins selected 6 boys, 6 women and 8 men from his somewhat larger choir. Because many Canadian choirs will not have boy choristers, several of the psalms and canticles were sung by men and women alone.

The Choir of Grace Church is somewhat unique because, while it presents Sunday-by-Sunday services of the highest standard, it is also heard frequently on the CBC networks in the presentation of the great religious choral works. During 1960 the men and boys of the choir sang the services for 16 days in Westminster Abbey and followed this with choral services sung in many British Cathedrals.

The choirmaster, John M. Hodgins, is also conductor of the equally well-known Chapel Choir of Bishop Strachan School, which has toured Great Britain on two occasions which included a successful entry to the famed Eisteddfod in Wales, has sung at the Seattle World’s Fair and in 1964 is to sing at the similar Fair in New York City.

During more than four hundred years the Service Music of John Merbecke has survived neglect, misuse and even attacks by the Church it was designed to serve. Perhaps its return to a wider use than Merbecke could have foreseen is due in part to the great revival of all music from medieval and renaissance times, a revival in which the Anglican Church of Canada is just beginning to share. But there can be no doubt that the work of Dr. Healey Willan has focused attention upon this music in Canada. His first edition of 1934 was included in the hymnal of five years later but enjoyed very limited use during the next ten years or so. It was heard more frequently during that time in other religious communities than the one for which it was written and arranged. Then, as in other generations, its almost perfect combination of liturgical aptness and congregational simplicity restored its fortunes. By 1959, not only was it revised for inclusion in the music of the new Prayer Book, but a separate edition for public use was once again necessary. It is this new edition which provides the music sung on the present record.

The well-known musicologist, H.C. Colles, in his preface to a book on Merbecke’s music1 says: “[this] music, it has often been pointed out, lacks both the free arabesque of plainsong and the intertwined phrases of Latin polyphony. But in accepting the limitation Merbecke became the pioneer of a native song. The syllable-to-a-note principle called attention to the existence of certain natural verbal rhythms inherent in the English language … Once these verbal rhythms were recognized, English music had begun to take shape from the English language.”

Merbecke assigned certain definite time-values to his notation and this does give us clues to the pronunciation of his day. But the English of today is very different and the edition of Healey Willan as sung on this record2 makes it possible for modern English to be sung fluently and rhythmically by the average congregation and choir.

Opinion is still divided on the matter of organ accompaniment to the liturgical music of Merbecke’s era, but without overlooking some glorious exceptions the Church has accepted, nay even required, accompaniment to its liturgical texts for congregational use. On this record the emphasis has been on the text and singing, and therefore the organ was skilfully played by Roma Page Lynde so that it did not intrude upon the singing. Some organists, however, may wish to provide greater variety and colour in their accompaniment, but this should not be done until the singing is secure and well-defined.

Music for the Holy Communion

Responses to the Commandments, Kyrie, Nicene Creed: The Decalogue was not a part of the 1549 Prayer Book for which Merbecke wrote his music, and this setting, like that of the Three-Fold Kyrie which follows, is arranged from his music for the Nine-Fold Kyrie still used in many branches of the Anglican Church. For the Nicene Creed, the melody throughout is almost entirely that of Merbecke except for changes in the text and variations between 16th-century pronunciation and that of today, e.g. “re-mis-si-on”.

Sursum Corda, Preface, Sanctus, Benedictus: Merbecke did not supply any music for the Sursum Corda nor for the Prefaces which follow. The Common Preface has been used and this, like the Sursum Corda, is arranged from the traditional music of the Latin rite. It should be noted that despite current belief, there has never been any “correct” version of this music in English; every editor has adapted successive English texts as he thought best and the present one was prepared by myself. The present-day endings of the English Sanctus and Benedictus are the reverse of those in the 1549 Prayer Book of Edward VI and the music has been adapted accordingly.

Agnus Dei and The Lord’s Prayer: These are almost exactly as set by Merbecke except that the original Lord’s Prayer ended at “deliver us from evil. Amen”, and music was adapted for the Ascription which now follows the prayer.

Gloria in Excelsis: Originally this appeared after the Nine-Fold Kyrie at the beginning of the Service but successive Prayer Books in Britain and Canada have placed it at the end. Merbecke’s music is almost entirely retained throughout.

Magnificat and Nunc Dimittis; Psalm 23 and Psalm 121: The two Evening Canticles, with two psalms, are sung from the Canadian Psalter published in 1963 by the Anglican Church of Canada. As Anglicans usually read their Psalms from the Prayer Book, it is not generally realized that their version is quite different from that of the King James Bible. The Anglican Church for several hundred years has used the beautiful (if less exact) translation of Bishop Coverdale who lived at the time of Merbecke. The Canadian Prayer Book of 1962 presented to the Church a new translation and it is this which appears in the Canadian Psalter.

Anglican Chanting, like Merbecke’s music, has undergone many and varied vicissitudes since its uncertain origin in the 16th century. A distinct style of music, it has been almost entirely ignored by musicologists except to condemn it as the doubtful progeny of an ill-advised union between plainchant and polyphony! Yet probably no other religious art-form (except the congregational hymn) has exerted so much influence on the worship of English-speaking peoples. After four hundred years as a peculiarly “Anglican” tradition, it is now found in its traditional form in the hymnals and service-books of nearly every Protestant denomination. And the current crusade for national languages in the Roman Catholic Church has produced what are termed (after the originator) the “Gelineau Psalms”, which are easily identifiable as our historic Anglican chanting. So there appears to be something about this music which makes it survive despite all obstacles; certainly, at the present time, its place in our worship is secure.

The Music of Mattins

The Canadian Psalter of 1963 is used for all this music and includes, besides the appointed Canticles at Morning Prayer, Benedicite omnia opera which is sung on certain occasions during the Church’s year. This canticle has always presented certain difficulties because of its length and wide diversity of subject matter. The 1962 Prayer Book allows some latitude in its presentation and the version heard on this recording is one of these permitted variations.

Venite and Te Deum are presented in full, though the Prayer Book now permits the omission of the final section in each case. The last four verses of Te Deum originally were responsive phrases and not part of the Canticle itself.

The Preces and Responses are, of course, common to both Morning and Evening Services, and the Psalms might be sung at either time. The several chants, in order of singing, were composed by:

These composers, many of them equally famous in secular music, span 150 years of Anglican cathedral choralism, and although almost every organist from their day to ours has composed his own chants, it is interesting to note that this basic selection will be found in every modern psalter. They were chosen because it is a cardinal rule of good chanting that the music must be known by heart before the words can be chanted with complete freedom from musical time-values.

Five additional selections are provided, from another vinyl LP record which was produced in the early 1970s, entitled “Exultet”. It features live recordings of the Easter Vigil made at St. James’ Church, Dundas, in 1971, 1972 and 1973. The sung propers for Easter – the Collect, Epistle and Gospel – are reproduced here, as well as the Lord’s Prayer and the Gloria in Excelsis, to demonstrate how the latter two sound when sung congregationally on a particular occasion, rather than under controlled studio conditions as in the “Music of the Anglican Liturgy” recording. (The Gloria in this recording was augmented by the ringing of handbells and the church bell, as a sign of the celebration of Easter.)