I confess that I didn’t really know what I was getting into when I agreed to be a speaker at the Cranmer Conference in North Bay this past weekend. But I honestly couldn’t resist the earnest enthusiasm of Kayla Krasnor and Will Stennett in making the request. Advertised as an event featuring “serious discussion and lots of traditional Anglican Book of Common Prayer services with glorious music, splendid food, and captivating speakers” this Cranmer Conference replicated similar conferences held in different parts of Canada since 2006. While in my case it would be hyperbole to describe the speakers as “captivating”, the gathering did feature excellent discussion, delicious food and moving worship. And what made it most interesting was the fact that the conference participants were all young people –those between 19 and 29. And there were twenty-five. 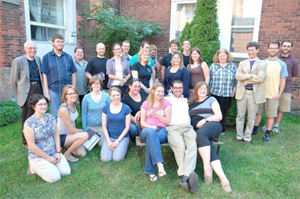 The theme of the conference was “How Firm a Foundation: the Bible and the Prayer Book”. I delivered three talks, the first treating what the Reformers meant when they referred to the Bible as “God’s Word written” (Article XX). This was followed by a session on “The Bible in the Prayer Book”, where we saw just how permeated the Prayer Book is with Scriptural quotes and allusions. And then I spoke about “The Bible and the Prayer Book” where we examined Scripture’s place in the lectionary as a curriculum in the school of discipleship. The discussion demonstrated just how important Scripture and liturgy are to the conference goers and confirmed for me why worship leaders need to take biblical preaching and liturgical presidency seriously. Jay Koyle provided an excellent example of the former when he spoke at the final banquet on the significance of words.

One of the most moving parts of the weekend was actually using the BCP for services of Evensong, Morning Prayer, Compline, and, at the main service at St John’s Church, Confirmation and Holy Communion. Our use of plainsong in reciting the Psalter was especially effective. The discipline of fitting the words to simple musical lines in ancient modes had a way of making us pay closer attention to the thoughts of the psalmist.

The conference included an extremely fine lecture on the history and use of the psalter by our guest organist, Aaron James. Aaron is a doctoral student at Eastman in Rochester, NY, and won this year’s National Organ Playing Competition in Hamilton. Aaron was our organist on Sunday when it was my privilege to confirm conference organizer, Kayla Krasnor. Kayla became a Christian while studying music in London, Ontario. It was announced at the service that she will be the new interim choir director at St John’s.

When word got around about the conference, a group of over-29s wanted to get in on the action. So a lunch was organised at St Brice’s Church on Saturday that brought out over forty people from a number of the churches in the deanery. Following a brief talk on the theology of the Prayer Book, folks asked questions about the future of liturgy in the Church. They were pleased to hear that the Prayer Book appealed to some of today’s youth and expressed the hope that there might be a resurgence of interest in the BCP.

The organizers tell me that the Cranmer Conference was a great success, with an attendance beyond what they had dared to imagine. This confirms my impression that the BCP continues to inspire a younger generation, even as we approach the 350th anniversary of its publication. But I am not surprised. The BCP has been called the Bible arranged for daily prayer. Its language transcends the prosaic, echoing the honesty and insight of generations of saints from the earliest period of the Church’s history who have struggled to follow Jesus Christ, and who have found grace in his word and sacrament.

(By the Rt. Revd. Dr. Stephen Andrews, then Bishop of Algoma, reprinted from his online blog posting of September 1, 2011.)